I find myself in the editor's seat with the intention of unleashing old no.9 early in 2018, in the long Aotearoan summer holidays.

I have picked up quite a bit of material from Gaptooth and have already elicited a heady mix of more offerings and promises of goodies from the shining stars of the Trollworld heavens.

I shall not be able to stop myself from lobbing a few T&T hand grenades into the cauldron and there are others in New Zealand marching militantly towards D Day (delivery day).

Your Trollworld needs you! Heed the call to arms, a place where the Muse descends and kisses the brow of writers and artists alike.

The Bower of Bliss

Charlie and rolled up 2 L1 wizards, Volipiter the Gusty and Saruman, and they have been adventuring in a couple of solos. The second is KStA's Infinite Adventure. We stumbled across a puritan called Kyle on a beach and he's rowing us to a place called the Bower of Bliss after we declined to pay the 1,000 GP fee to just get there effortlessly.

Unfortunately the solo's paragraphs ran out before we got there and before we worked out if Kyle is a friend or not.

We have been plotting and ferreting about, asking the dice key questions and now we know that Kyle is a L11 wizard with what looks like an untamed deluxe magic staff.

The Bower of Bliss is utterly evil but not very dangerous. It is run by one of the Arch-Demon Ashgoleth's lieutenant's, Terju, the lord of a realm of fire and hatred.

The danger will come from rolling a critical fumble and we have to survive 10 life or death challenges.

The Bower of Bliss is a 16th century poem by Edmund Spenser. 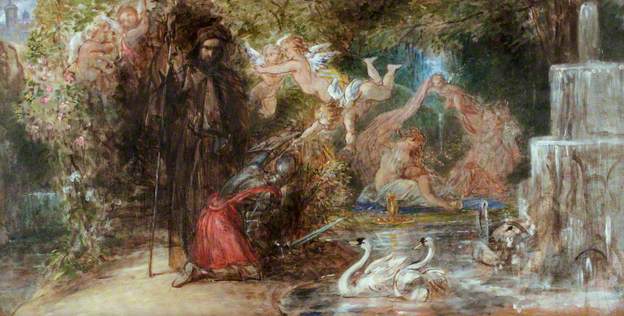 More Sightings of Monsters and Delvers in Hawaii

I didn't go looking for trouble and I wasn't seeking adventure but I certainly found it... 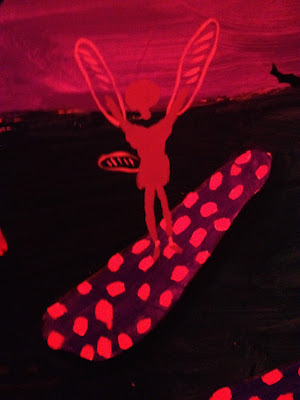 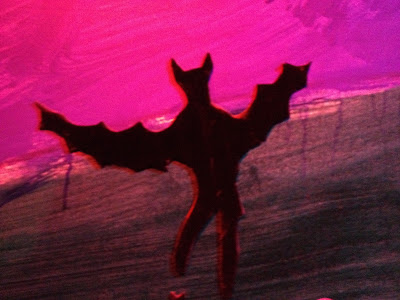 Imps like drying their wings at dusk at Waikiki. 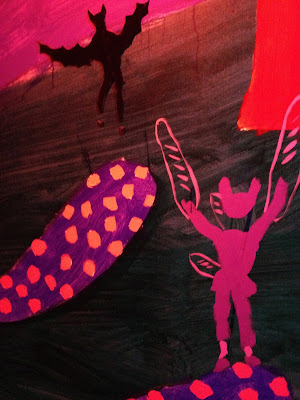 The do tend to stalk the fairies. 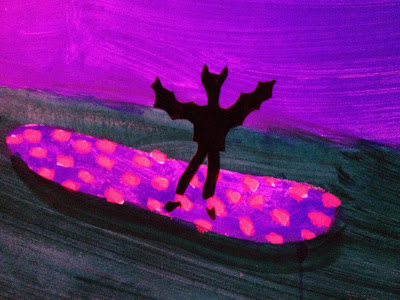 But they can't catch them so they try to catch waves instead. 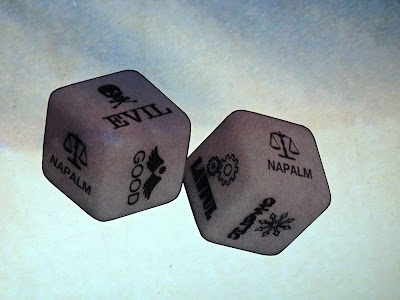 The dice do appear to be loaded. 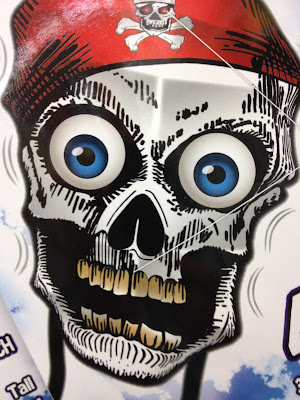 The skeletons get spooked easily. 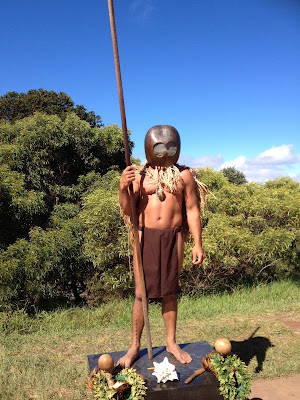 Not surprising given how fierce the warriors are.

Unexpected Evidence That World's Premiere Artist Has Moved To Hawaii 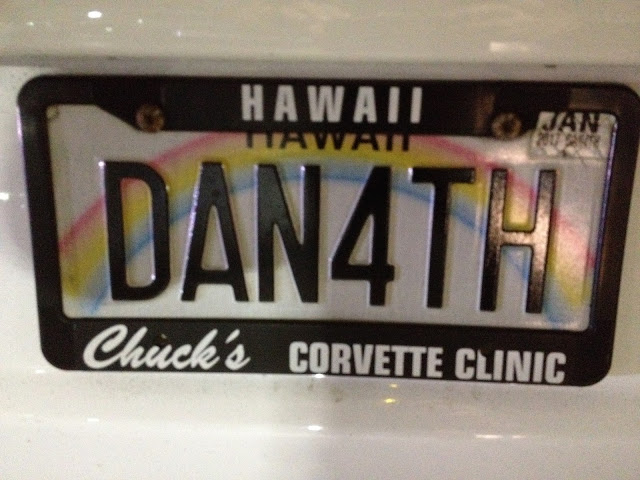 Here is the recently constructed dome, replete with dwarves mutated into gharg guards, at the neck of the Undead Peninsula where the Blunderbis adventure is taking place: 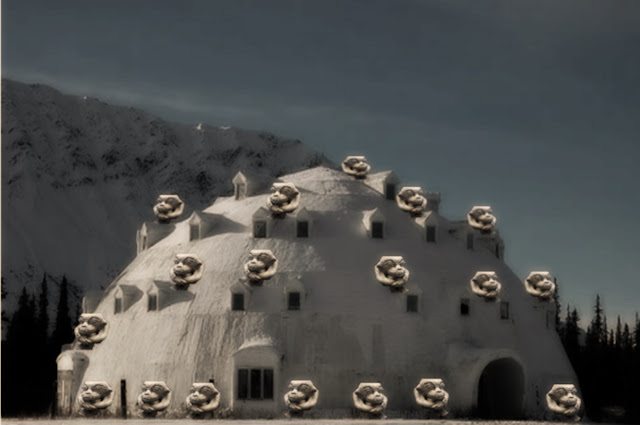 The game has 7 players and all the pcs are dwarves. 4 of the players are new to T&T. They have taken to it like ducks to water. For me, it has the makings of the Best Group Ever :)

Meanwhile, do some clearing out, I rediscovered these: 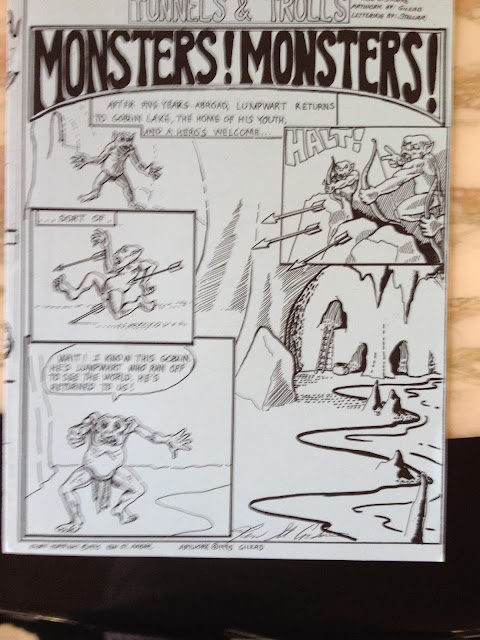 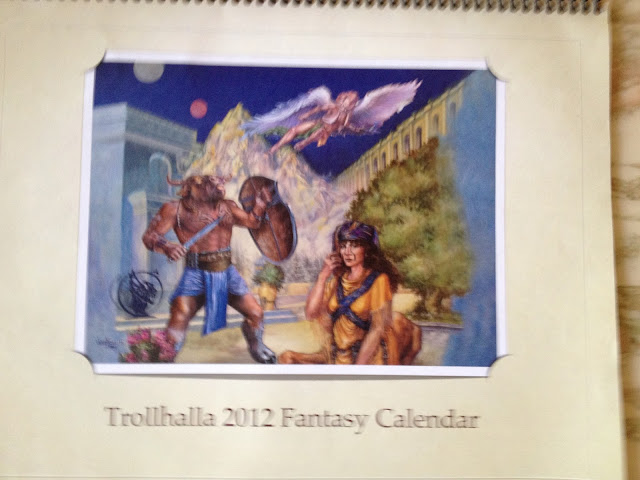 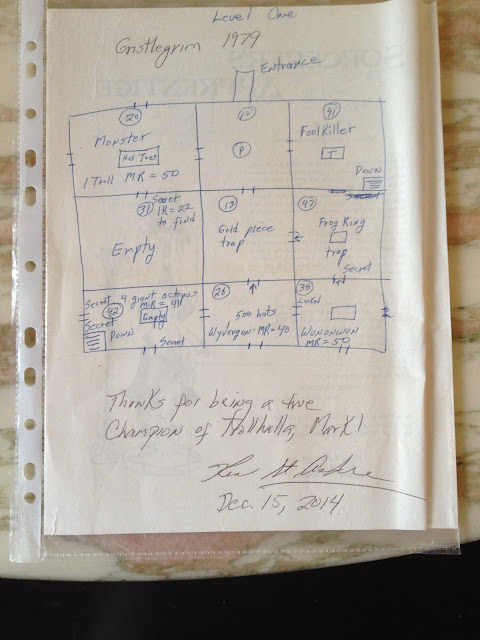 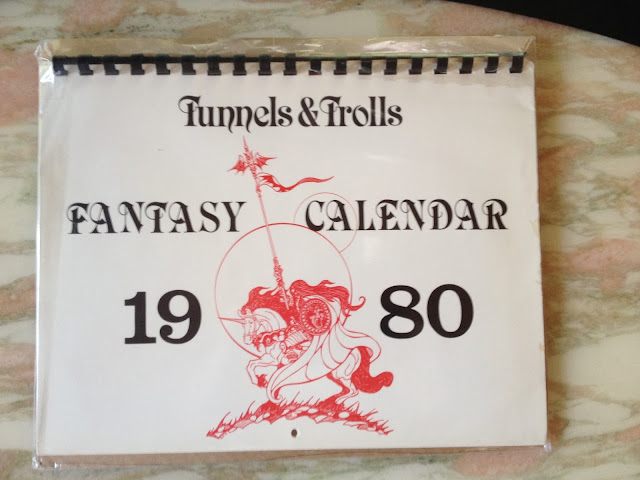 The Shrouded Hall of Makadee

This is my contribution to a collaborative L3-6 dungeon being brewed at the Trollbridge...

It's rather AR Holmes, I think, gothic and dangerous!

The door to this room (5’ wide and 15’ high, 3” thick) has a steel, virtually indestructible, clock set into its bronze surface. The hands of the clock are not moving. Magic can be detected from the clock – it has a ‘duration’ spell on it. Skulls are embossed around the edges of the door.

The door can be opened only if the hands of the clock – currently at 6.30 – are moved to 12 o’clock. If this is done, a ‘click’ will be heard which signifies the lock mechanism being sprung. Once started, the clock winds anti-clockwise. An Omnipotent Eye spell will now reveal that anyone not passing through the door will have a Hell Bomb Bursts go off inside their head when the clock completes its cycle back to 12 again. [Note for GM – if the pcs do not use Omnipotent Eye and then Glue You, they will really be racing against time.]
The hands are moving at a speed that will allow them to get back to 12 in 30 minutes. A further OE spell will reveal that the clock can be slowed by a Glue You spell to give double the time.

Beyond the door, the room is 50’ wide by 120’ long, with a ceiling covered with spikes some 20’ above the floor, which is a sheet of heavily oiled steel – very slippery so L1 DEX for physical activities requiring moderate movement, L2 + for more ambitious manoevres. The spikes will only fire downwards if the ceiling is struck hard (eg by the statue in a fight perhaps) – each pc would be hit by 1d6 spikes doing 2d6 damage each directly through armour with the level of a SR made on their choice of LK, DEX or SPD reducing the damge by 2 per level.

The walls are mirrors and the room is filled with musky mist, coming from large braziers burning in each of the 4 corners. Visisbility is no better than a half-moon, cloudy night. The braziers could be overturned with L4 SRs on STR. The mist saps those breathing it in so that SRs become 1 level higher every 5 minutes (L2 INT to notice, GM to get players to roll without telling them what for).

In the centre of the room is a statue of a 6-armed spider-eyed humanoid monster. The statue is 10’ up on a pale blue cube of rock, 10’ for all dimensions. The statue is itself 8’ tall and carries 3 bows and has a large sheaf of arrows on its back, as well as having 2 scimitars on each hip. It is magical and cannot be affected by magic less than L10 while un-animated. Its many eyes are rubies which can fire heat rays when it is active. The rubies are worth 2000 GPs in total.

The statue activates when a mirror is cracked. If this happens, the pc breaking a mirror must make a L7 SR on LK or appear to become instantly unlucky – a black cat tattoo appears on the back of each hand with the number 13 beside it (permanent). In fact, the pc just suffers the next SR being 13 levels higher (APs to boot) unless a critical fumble was rolled in which case the unlucky run is 13 SRs.

When a mirror is broken, the room begins to fill with thick green slurry from the place where the glass broke. The slurry smells very nasty. PCs need to make a L1 SR on CON of fight at 50% combat adds until washed off. If it is consumed, it reduces all physical attributes by 1d6 permanently. The slurry can be used to hide from the animated statue – or be hurled at it (the slurry will make bow shots harder by 1 level and the monster fights at 50% effectiveness if knocked into it – as do the pcs unless they make L3 SRs on the average of STR and DEX).

The monster has MR600 and cannot be harmed by magic or physical assaults until activated. Makadee will fire at the unluckiest 3 pcs each round until forced to join melee combat. It needs only avoid a critical fumble to be on target and does 4d6 damge directly through armour per hit. PCs can reduce the damage taken with successful LK SRS – L1 reduces by 25%, L2 by 50% and so on. The monster resists direct magical attacks if the caster’s WIZ is less than 60. It will attempt to slash ropes thrown about it once animated (its SPD is 20 if this is needed should the pcs attempt to topple it). The mosnter’s eyes can also do damage – it will target the smartest pc and do 2d6 direct damage unless that pc is able to make a L2 SR on either DEX or SPD to evade the attack.

The block of stone the monster stands on has 2 secret doors, one facing the pcs aas they enter, the other at the rear. They take an Oh There It Is spell or a L3 SR on any of INT, LK or DEX to find (the GM should listen carefully to what the pcs say they are doing rather than give an easy choice). The door at the front is unlocked and teleports pcs out of the room.

The rear door in the stone is also unlocked and contains a slim silver headband with the words, “Don’t Think To Possess Me”. The crown is magical but gives off a zap doing 2d6 damage if anyone attempts to cast magic on it (eg Omnipotent Eye). To possess the power of this artefact, a pc must fail a L1 SR on INT – the gain is to be able to cast the equivalent of Hold That Pose with one’s eyes (need to lock onto the target’s eyes) -  the immobilising effect lasts for 30 seconds and impacts on creatures with MRs up to 10 times the wearer’s INT  (or not greater than the caster’s INT for npc, etc).

All this against the clock! GMs might adjust the time allowed if it seems clear it will be too short but the screws should be turned! Any pc surviving this room should be awarded 600 APs.
Posted by Mark NZ at 10:55 AM No comments:

The Fun Boy Three and Bananarama once sang that "it ain't what you do, it's the way that you do it."

We just has a skype game with my mum, 4 of us. We played D&D mechanics - there were no fights and it felt just like T&T.It's just a matter of how much freedom a GM allows the players and if he/share is prepared to skip happily off into the unknown.Of course, it was T&T really - a rose by any other name. 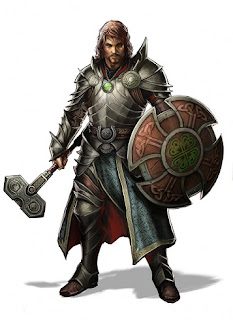 This Charles II - he is a life domain cleric. Apparently, the party's composition means he should be in the front line fighting but Charlie thinks in Ebony and Ivory - as Paul said to Michael, "I'm a lover, not a fighter." So he's going to stay back with my wizard and do what healing he can, refusing to be a war-gamer.
Posted by Mark NZ at 3:00 PM 11 comments: